On February 27th, Deb Hale led a morning bird walk on Virginius Island in Harpers Ferry. Deb wrote the following report after the walk, which yielded many sightings. The report has been lightly edited.

The promise of mild weather brought folks out this morning, but guess what? Despite the relatively late start time of 8:30, the cold air lingered, temps never lifted out of the 30’s, plus the “friendly” breeze off the river really chilled us down. Still, the sun was shining, and there was bird activity for much of the walk. A couple of new birders became enthralled with decent looks at Pileated Woodpecker, Red-shouldered Hawk, Belted Kingfisher and Common Mergansers. It’s always fun introducing birds to fresh eyes.

The river level is still way up; we got a little muddy, but we learned that the reason the geese are spending lots of time on the railroad tracks is that they are gobbling up the milled wheat that has leaked out of the hopper cars en route to market. Interesting! We were surprised NOT to see Yellow-rumped Warblers or Winter Wrens. We were happy to see Robin numbers increasing.

After the walk, four of us drove to The Point in Lower Town to look for falcons. Sure enough (thanks, Mike!) there: sitting tight on a rock ledge about 10 feet above the left-hand upper corner of the Powder sign, was a Peregrine. We were able to get great looks through Mike’s scope and Carol’s camera. Great way to end the morning.

Thanks to all participants for joining in today’s walk.

The Migration:  September is here and the fall migration is about[...] 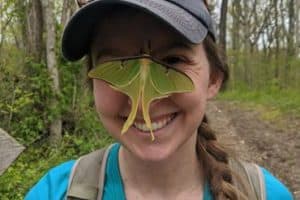 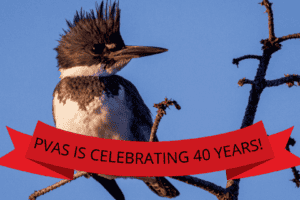 See the article in the Martinsburg Journal Celebrate our 40th Birthday[...]