General Description. The Yankauer Nature Preserve is a 104 acre parcel of mixed hardwood forest on the eastern 2/3 and early-successional scrub and cedars on the western 1/3 of the property that fronts Whitings Neck Road.  There is about 200 yards of Potomac River frontage on the NE corner, home to a nice bench for resting while the river passes.  In spite of a burgeoning deer population the preserve’s woodlands maintain good structure with a healthy ground cover and shrub layer.  A rather extensive trail system offers access to all of the available habitats.  The preserve is owned by The Nature Conservancy and managed by the Potomac Valley Audubon Society. Click here for an in-depth page about the Yankauer Preserve. 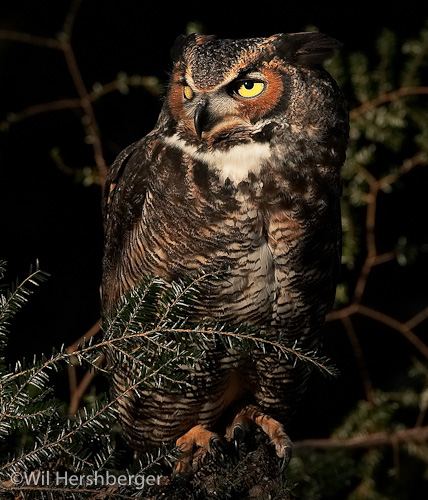 Seasonal Variations in Birding. Spring migration is the highlight of the birding year at the preserve. Situated within the easter foothills of the Appalachian Mountains, a favored migration corridor, a host of migrating songbirds come through and to the preserve. From late April to mid-May there is a good chance of finding a nice mix of migrants anywhere within the preserve.  Providing as much color as the abundant wildflowers blooming in spring will be the warblers, vireos, thrushes, and flycatchers that will dominate the flight.  Many will stay to breed on the preserve, including White-eyed and Red-eyed vireos, Wood Thrush, Eastern Wood-pewee, Eastern Phoebe, Acadian Flycatcher, Ovenbird, American Redstart, Common Yellowthroat, and Blue-winged Warbler.  They will be joined by Gray Catbird, House Wren, Blue-gray Gnatcatcher, Scarlet Tanager, Baltimore Oriole, Song Sparrow, Indigo Bunting, and many others.  Permanent residents include all of the local woodpecker species except Red-headed, Carolina Chickadee, Tufted Titmouse, White-breasted Nuthatch, Carolina Wren, and Northern Cardinal.  Barred Owl, Cooper’s Hawk, and Red-shouldered Hawk will frequently be encountered, as will the less frequent Eastern Screech-owl, Sharp-shinned Hawk, Red-tailed Hawk, and Bald Eagle.  In winter the locals will be joined by Hermit Thrush, Winter Wren, and several species of sparrows.